The TimeKeeper is relatively rare, discontinued 91mm Swiss Army knife. It has an analog timepiece in the front scale. Tool-wise it is very close to the Compact, replacing the tweezers in the front scale with the timepiece. It is one of only a few 91mm models with a combo tool instead of the can opener and bottle opener. Like the Compact, it has plus scales (with a ballpoint pen and a straight pin) and it normally comes with a mini screwdriver in the corkscrew. 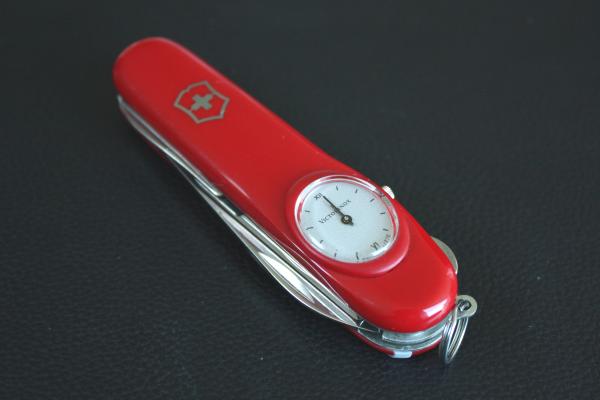 Earlier knives had a clock face with Roman numerals, later ones had 12 Arabic numerals, making the knife in the pictures one of the older models. The TimeKeeper was introduced in 1991 and was discontinued in 2007. Since this one has scissors with a screw, it was probably made in 1991. Notice that the multi purpose hook does not have a nailfile/match striker.

Victorinox also made a SwissChamp with the same timepiece in the front scale. That one was called the SuperTimer.

I bought this TimeKeeper brand new in a local hardware store in 2010: I guess it had been on display there for several years!