This is a picture of 6 very different 111mm Swiss Army knife models made by Victorinox. 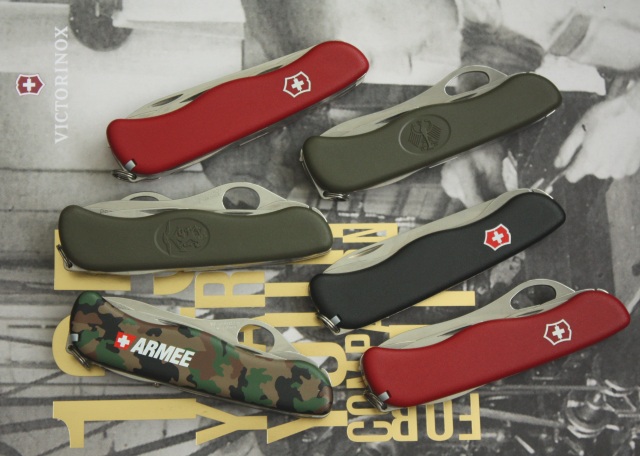 Top left is a Jumpmaster. This model usually has black nylon scales, but this one is red which is rather uncommon.
Next to the Jumpmaster is the first version of the one-hand German Army knife, with the older, oval shaped thumb hole and a low-profile lock release.
The next one is the 2010 Dutch Army knife. This was the first Victorinox knife with 2 liner locks and 2 liner-locking blades, both featuring one-handed opening. This knife is pretty hard to find.
Next to the DAK is the most basic version of the Sentinel: it’s not one-handed, has a plain edge blade and has no corkscrew and no pocket clip.
The next one is an uncommon 90 ARMEE knife which was offered to Swiss Soldiers during the short period between the old Alox Soldier and the new 2008 Swiss Army knife (basically a one-hand Trekker).
The last knife is a red one-hand Trailmaster. This is basically a Trekker but with red scales and a different name (aimed at the European market I believe).

These knives (and more ;) ) will be for sale at EDC Source soon!