This is a pretty unusual SAK. It looks like a Huntsman, but in fact it’s different. I bought it from my friend Marios. On several of my trips to France and Germany, I had seen similar knives but I had never managed to buy one, because these where used as a display piece and were never for sale. 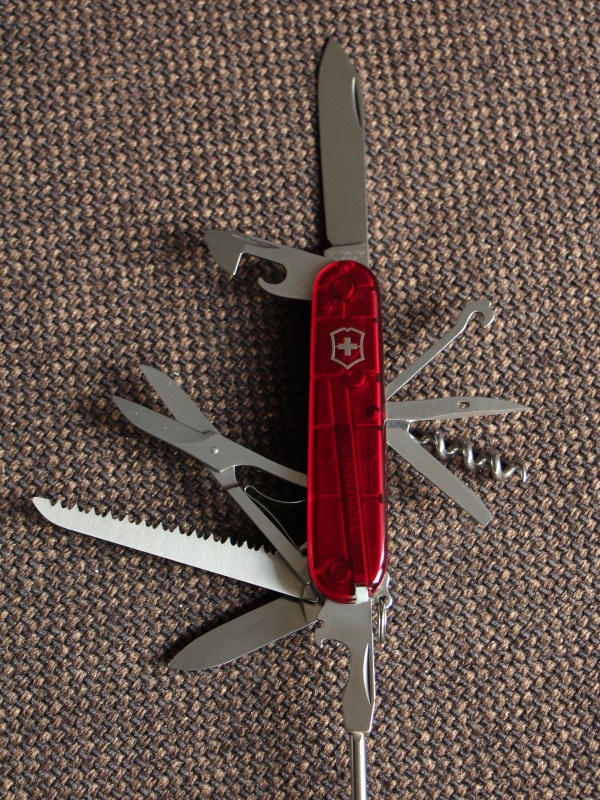 So what’s so special about it? First of all, the tool configuration is slightly different. It’s basically a Huntsman with chisel. I never understood why some models, including the Huntsman, do not have a backspring tool on the wood saw layer while others have a chisel or fine screwdriver (both fit the wood saw layer and metal file/saw layer). It’s probably a cost thing.

Second thing is that most of the tools have an extra stop, making it easy to open up the tools exactly in the way you can see in the picture. Also, it feels like the springs are a bit weaker than usual, the tools lack their usual “snap”.

Another difference is both the small blade and the large blade are not sharpened. They do have a bevel but they are completely blunt.

And finally, it is attached to a stainless steel post with a rather heavy base (not in the picture). The 15cm tall post is welded to the tip of the bottle opener. The base has a small hole in it, purpose is unknown.

I’m very happy with this item. I remember seeing the first one in I believe 1994 and I finally got hold of one twenty years later :)

Edit (20200310): I bought three similar, but not identical SAKs a while back. Plain red cellidor scales. One of them has the chisel.