In the 1960s or 1970s Victorinox offered two versions of the Fisherman’s knife or Fischermesser. They were available with blue scales (uncommon back in the day) with a fish emblem on the top of the front scale, instead of the Swiss shield and cross. These knives were equipped with unusual scissors with a cut-out, and of course the fish scaler.

The one I own is actually a bit more uncommon. It lacks scissors and a metal file. I have never been able to find a reference to it in any of the old catalogues. If I follow the old naming convention then this knife would have been a 234faU (Spartan or Standard with fish scaler, tweezers & toothpick and bail).

It has all the nice features of a vintage knife: thick main blade with Victoria tang stamp, +PAT stamp on the can opener, aluminium tipped tweezers, clip point small blade, five-turn corkscrew, bail/shackle and fish scaler without ruler. The scales are a lighter shade of blue than more recent cellidor scales.

This unusual tool config minus the tweezers and the bail (or key-ring) was also used for the Battle of Murten Battle Series knife in 1989. 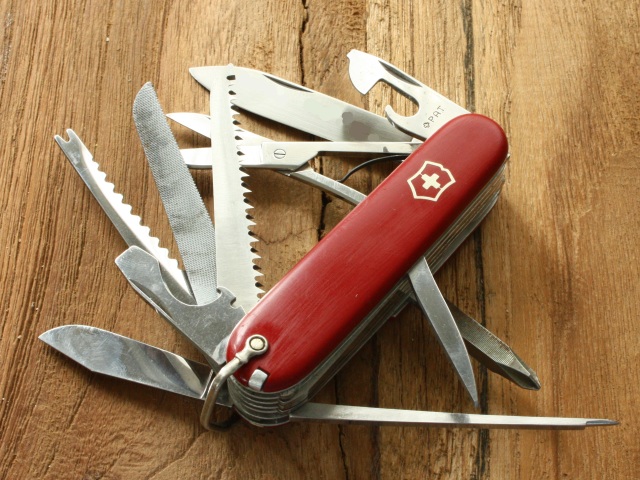