The Handyman is a pretty large, 6 layer Swiss Army Knife. It adds scissors, pliers, a wood saw, a metal saw (with metal file and nail file), a chisel, a fine screwdriver and (since 1991) a multi-purpose hook to the basis Spartan model. The one in the pictures is an older knife since it has no multi-purpose hook, it has a “fluted” corkscrew and the scissors have a screw.  It was probably made between 1985 and 1991. 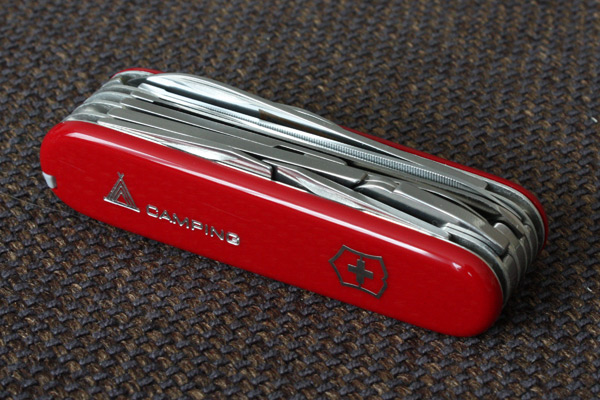 This knife does not have the original scales, since those were too badly scratched. I fitted the ones from a Camper on this Handyman, with a hot stamped Camping logo (which is awful compared to the metal inlaid Camping logo). I should bring it back to it’s original state and replace those with regular, red cellidor scales. And yes, I know the scales don’t fit well, there is a gap between the scales and the outer liners ;)

Edit: it seems I changed the scaled to blue plus a while back. And this SAK has been given away.